Om is the cosmic sacred syllable, which encompasses all of the universe, energy and consciousness. Namo means “to bow” or “to bow to.” Narayanaya has more complex roots and interpretations. Some take its root from the Sanskrit word for water, naara, while anaya means “resting place” or “shelter.” Thus, the word is another name for the Hindu god, Vishnu, whose resting place is water and is often depicted on an ocean in Hindu art. Alternatively, naara can also mean the “living entities,” so narayanaya can also mean the “resting place of all living entities.”

This humanitarian connection explains why it is said that the om namo narayanaya mantra should be chanted with the intention of sending positive effects to all the people of the world. It can be used as a chant for peace, health and happiness for all. 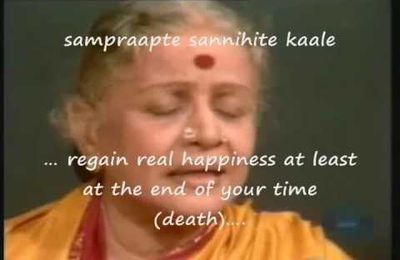